The German coach has given Chelsea fans some good news to cheer about as the Chelsea squad prepares to face city rivals Tottenham Hotspurs in a midweek clash on Wednesday.

This will be the second leg of the Carabao Cup semi finals, Chelsea will also be favourites heading into the game as they have a 2-0 lead from the first leg last week. 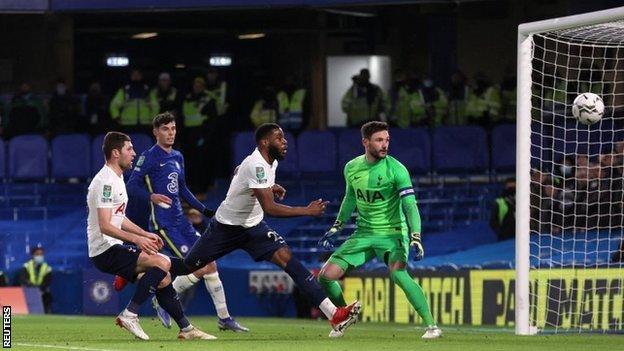 With Spurs already having one feet in the coffin heading into the game tomorrow, Antonio Conte’s team will have to pull off a miraculous comeback to put this one in their bag and head towards the final.

The coach, however, opts to remain as humble and respectful towards the opponents as he always is.

N’Golo Kante is a major doubt for tomorrow’s clash as it is not a surety if he will be able to return due to Covid-19 isolation regulations that have been put in place currently.

The same can also be said for Thiago Silva, as Tuchel admitted they will only know if the Brazilian will return to Chelsea camp for Spurs’ clash just before the game.

Tuchel on team news: "Right now, we had the same guys as in the cup game. There's no news but no new injuries. We wait on last minute decisions on N'Golo Kante and Thiago Silva [who had Covid]." #CFC

Chelsea’s starting wing backs are obviously still out. Reece James has to deal with a hamstring injury which will end up with him being out of Chelsea’s games for around 6 weeks.

Ben Chilwell will be getting a surgery done on his partial ACL rupture which will most likely keep the former Leicester star out for the remainder of this season.

Talking about N’Golo Kante and Thiago Silva, Tuchel said “Right now I would say the same guys we had in the cup game, no news. No new injuries, which is good news for us. We have to wait for last minute decisions on Thiago and N’Golo.”

Trevoh Chalobah is also expected to be out for a couple weeks more since his injury his picked up against Liverpool in the Premier League.

He further went onto say: “Yeah (replying if they were released from isolation). Cardiac tests. Covid tests. You have to follow some protocol to bring them back to training.”

“I don’t know. We have to wait, to see if they are ready in training and respond. If we do it it’s a gamble. I’m not sure if we do it and how much responsibility we can take there.

As Ben Chilwell and Reece James will definitely not be available for the fixture against Spurs due to injuries, they won’t be on the team sheet. We can count them out.

With Thiago Silva and N’Golo Kante also being a doubt, they may not end up being on the starting eleven as Tuchel might not want to put them in right off the bat.

Looking at Chelsea’s recent performances and the previous leg against Tottenham Hotspurs last week, we can try and pin down the possible starting XI Thomas Tuchel may opt for against Spurs as they hope to reach the final.

Maurizio Sarri not satisfied with the quality of his back four